In other news, I was 13, graduated from Goudy Grammar School and entered Lane Technical High School. Sorry to say, the significance of those landmark headlines were lost on me and my little world.

My parents and I had emigrated from Hong Kong’s New Territories to Chicago’s Uptown six years previous, in 1967.

Like goldfish plucked from a tiny bowl and tossed into the ocean, we moved into 5030 Winthrop, an apartment complex that housed a hodgepodge of immigrants and ethnic minorities. It was next to the “El” tracks and the rumble of trains became our lullaby, the alley our playground, the fire escape our porch.

I entered second grade at Goudy Grammar School, two blocks down the street. (See my column on “Coming to the Golden Mountain“.) When I was a sophomore at Lane, we moved into our own two-flat near Devon and Western—it took me two buses and nearly an hour to get to school.

I returned to Goudy and Lane with friends for the first time since graduation earlier this month, during our magnificent reunion weekend Sept. 18. Like a goldfish, yet again.

Goudy was a melting pot then, and still is today. As I recall, it had little more than the essentials to offer its blue-collar, underprivileged and underserved population.

In 1987, then Secretary of Education William Bennett blasted the Chicago School District for having an “educational meltdown,” inferring it was the worst system in America. The next year, he singled out Goudy as the city’s worst failure. (Read Chicago Tribune’s 1988 feature)

Nothing spurs action like those kinds of headlines. Within a year, the Illinois Legislature reformed laws to give local control to individual schools. By 2002, Goudy’s reading levels were above the state and national averages. “For those who believe that an inner-city school made up of immigrants from homes in poverty cannot achieve at high academic levels, Goudy proves otherwise,” wrote William Ouchi in Making Schools Work in 2003.

Today, it’s dubbed a Technical Academy and is among the 24% of Chicago schools receiving the highest rating based on performance, test scores and student growth.

Three of us got an inspiring tour of Goudy with assistant principal Bill Yeh showing off an array of advanced capabilities, along with partnerships with Northwestern University and the Chicago Bulls.

We saw bright hallways decorated by artwork (including students’ tweets about their hopes and dreams), munchkins in computer class (fifth to eighth graders get iPads), a marshmallow building contest in the vibrant library, and happy crowds running amok in the play area out front, which was a through street in our day.

Bill had embraced my offer to speak and arranged for us to meet with the 8th grade English Arts students.

I gave my usual key points to youngsters: in America, all things are possible; each of us is unique in the universe; and each should seek and give positive energy. 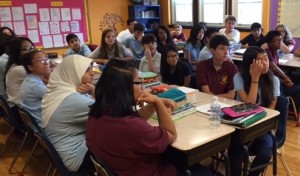 which came tentatively than enthusiastically. Finally, one student asked, “What if the American dream doesn’t come true for you?”

I paused as I processed what he was really asking: what if I’m not good enough?

The American dream is different for everyone, I responded. For example, college isn’t for everyone although continuing education is. Not everyone studies or learns the same way. You have to find your own way, the path that will fulfill your own unique potential.

Lane was large and intimidating then, and still is today. It was among the premiere high schools in our day, and this year was ranked 6th best in the state by U.S. News and World Report. But to us, it seemed to have faded both physically and in stature. 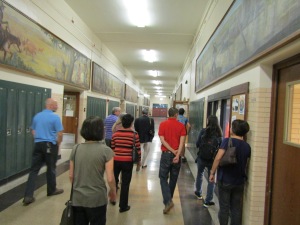 The largest high school in the city with 4,200 students, it now includes 7th and 8th graders. It’s officially called Lane Tech College Prep, which of course makes you wonder what the other high schools do.

While I finished my childhood circuit of Foster Beach and Margate Park, nine of my classmates started their Lane tour with lunch in the cafeteria. We then wandered the halls, peeking into music class, graphic design class, the innovation lab and its numerous 3-D printers, the beautiful library with oodles of Macs. We were disappointed to learn there were no longer shop classes like drafting, welding, woodwork or auto as we felt we had learned something useful. It wasn’t how to weld (or catch fire, as I did, before being quickly saved by classmate Fred Rhine) but how to coordinate mind, eyes and hands, to be precise, to create. STEM (or STEAM) is great, but for many, manufacturing skills are even better.

We admired the famed refurbished murals (much of the school is under renovation), brazenly went into the off-limits memorial garden with its quiet statues and plants, shivered in the gyms as we recalled the hideous uniforms we girls had to wear, and got a glimpse of the infamous swimming pool.

As freshmen in 1973, we were the third Lane class that included girls (1500 boys protested the decision). Girls were not allowed in the pool, probably because they lacked locker facilities. That apparently had remained a sore point with some of my gal pals. Not to be outdone, the guys moaned they were ordered to strip naked for swimming.

As ever, no one is immune from youthful angst.

For three of us, the best part of high school was Mrs. Jean Biddulph’s pre-calculus class. She was and still is the best teacher we ever had. She created a double period to fast track juniors into calculus, which had never been offered before. But more important than the classroom knowledge imparted was the respectful, loving manner that helped instill self-esteem, confidence and hope. (See my “Ode to Special Teachers” column.)

We were the first Biddulphites and of course the best. Eighteen more classes followed, and Mrs. Biddulph remained connected with many, including myself, who courageously started calling her Jean about 20 years ago.

So we were thrilled when she dropped in our reunion weekend, just days before her 78th birthday.

Jean was as brilliant, kind, engaged and charming as we recalled. It was heartwarming to reminisce with her and get the chance to thank her for molding thousands of students during her illustrious career.

We beamed, like she had just awarded us an A+.

Chapter one: Yes, you can go home again

2 thoughts on “Reunion magic: Returning to Goudy and Lane”