Siem Reap, Cambodia, is 32 travel hours from Fort Myers–literally and figuratively a world away.

The draw: a unique concentration of impressive Hindu and Buddhist ruins in the Angkor region.

And indeed, we had mystical encounters at Angkor Wat, the largest religious complex in the world; the former fortress of Angkor Thom and its Bayon temple; the tree-entangled Ta Prohm; and the intimate pink temple, Banteay Srei.

At its peak, the Khmer Empire spread across Cambodia, Thailand, Laos and southern Vietnam. From the 9th to the 14th centuries, Angkor was the capital. It was the largest pre-industrial city in the world covering nearly 400 square miles—about the size of Los Angeles–according to Wikipedia. The Khmer built extensive temples, reservoirs, canals and highways, using more sandstone than the Egyptian pyramids combined, transported from a quarry about 25 miles away.

Angkor Wat gained public awareness in 1860 and major restoration started in 1907. The area became a UNESCO world heritage site in 1992.

Remarkably, visitors can scamper across the ruins with very few exceptions. This will and must change over time in order to preserve these treasures.

The best preserved and most renowned, Angkor Wat is breathtaking with its grand symmetry and towers, set off by a moat. How big is it? Vatican City could fit nearly five times on the 500 acres within the walls protecting the temple.

It was built by king Suryavarman II starting around 1122, intended to be his mausoleum. Originally dedicated to the Hindu god Vishnu, its five lotus-like towers represent Mount Meru, the home of the divine beings in Hindu mythology. It was gradually transformed into a Buddhist temple and has remained a religious center since its creation.

The central tower, at 213 feet, was once the symbolic center of the empire. You can, and should, climb steep stairs (with railings) to the top for a great overview of the complex.

Like all the Khmer temples, Angkor Wat features extensive intricate bas-relief carvings telling stories. Unlike all others, it is oriented to the west instead of the east; No one really knows why.

Angkor Wat lends itself to spectacular sunrises—usually. Seven of us met up at 5 a.m. to catch the glory at 6 a.m., along with hundreds of other visitors. Alas, there was no sunrise to speak of that day. It was still a special meditative experience to awaken with the temple as it transitioned from dark to day.

Like Angkor Wat, it’s difficult to grasp the scale and design of Angkor Thom from the ground. This walled fortress, spread out over nearly four miles, was the capital during the reign of the empire’s greatest king, Jayavarman VII, who defeated the Cham invaders in the 12th century.

In front of each of the five towered entrances are causeways with a row of gods (devas) and devils (asuras) on each side, playing tug of war with a seven-headed serpent (naga).

But it’s the hundreds of giant Mona Lisa-like faces that grab you, starting with the ones on the 75-feet entry towers. 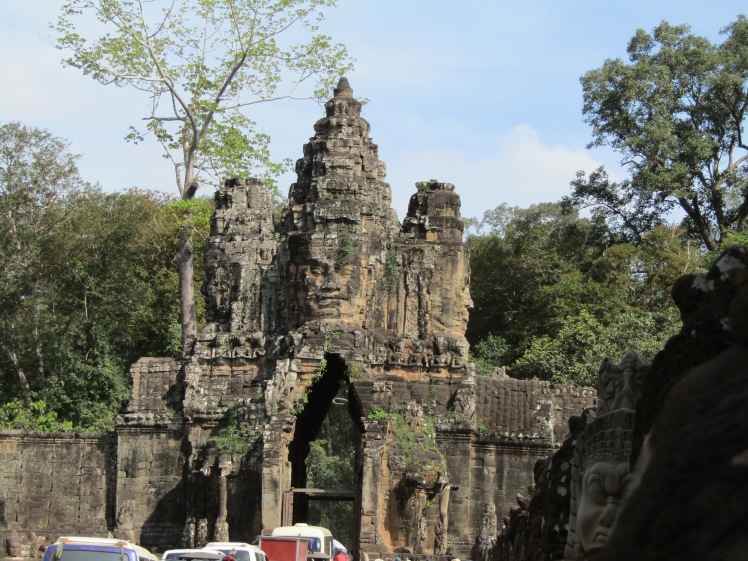 At the center of Angkor Thom is the Bayon state temple, which features 54 towers, almost all topped with the four faces of the Buddha of Compassion (Avalokiteshvara). (Jayavarman had converted to Buddhism, feeling that Hinduism had failed his kingdom.)

Just imagine when all these towers were golden and bronzed, as documented by a Chinese emissary, with all the original structures such as the royal palace, in their splendor.

Ta Prohm is a remarkable example of nature’s power and patience winning out. Gigantic trees have coiled their massive roots into the buildings, merging, uprooting and overwhelming much of the temple.

The site evokes mixed emotions of fearsome destruction and peaceful serenity at the same time.

Built as monastery by king Jayavarman VII as a residence for his mother, the temple housed more than 12,500 people, including 18 high priests and 615 dancers. Records indicate it served some 800,000 villagers, and amassed gold, pearls and silks.

Made famous by the Tomb Raider movies, Ta Prohm was wisely preserved as it was found, wisely, though one wonders what it will look like in 50 years. If you can, go in the early morning before the main crowds arrive.

(What kind of trees are they? These are most commonly named on the internet: silk-cotton, thitpok, strangler fig, gold apple, kapok.)

Banteay Srei or “citadel of women”

Known as “the pink temple,” this remarkably preserved beauty stands out due to the reddish color of its sandstone and intricate carvings.

Banteay Srei was commissioned in 967 by a priest rather than a king, dedicated to the Hindu god Siva. Considered a gem of Khmer art, Banteay Srei was rediscovered in 1914.

It’s small and located outside of the central temple area but well worth the extra effort.

The designs are more richly detailed and sophisticated; the atmosphere much more intimate. Apparently some or many of the sculptures are now replicas though signage is non-existent (as it is throughout Angkor).

This temple begs for protective shielding over its facades to preserve it for the future.

Notable trivia: Noted Frenchman André Malraux, Minister of Culture under Charles de Gaulle, was arrested in 1923 for attempting to steal major pieces from Banteay Srei. He ended up with a one-year suspended sentence.