It’s hard to believe that our community was strafed by Hurricane Irma just two months ago. The strongest winds of a weakened Irma hit Grandezza around 5:30 p.m. Sunday, Sept. 10.

While debris still is piled up throughout the region and many lives are still hampered, here in Estero, Florida, life is back to normal after flooding, downed trees, power outages, and lots of tension.

Irma was our first hurricane. When we moved here in 2010, we anxiously studied up on hurricane prep, examining the piles of heavy aluminum shutters we inherited, storing water and food. Then as one year came and went, we became more blase, especially as we were not in the flood zone.

We hadn’t paid much attention to Irma either. Until Sept. 5, when it became a Category 5 hurricane with winds of 156 mph — aiming for Florida.

Irma remained at that level for three days, setting a record for the modern era. And it sustained 185-mph winds for 37 hours, becoming the longest-lasting powerful hurricane or typhoon ever, according to Phil Klotzbach of Colorado State University and affirmed by the National Hurricane Center.

On Sept. 6, Irma made landfall at 2 a.m. on Barbuda, destroying most buildings there with 185 mph winds, then ravaging nearby St. Martin and the British Virgin Islands. It brushed Cuba late Sept. 8 with 160 mph winds.

Described as a “monster storm” and “Irmageddon,” Irma threatened Florida with 15-foot storm surges, 150-mph winds, and gusts over 200 mph. “This can kill you,” Florida Gov. Rick Scott warned on Sept. 7.

As Irma’s path moved from Florida’s East Coast to the West Coast, one third of Floridians—6.5 million people—were given mandatory and voluntary evacuation orders, along with half a million Georgians and 40,000 plus South Carolinians. Highways became parking lots; long lines formed for limited gas, water, generators and batteries. Flights and classes were canceled; businesses closed.

Fortunately, Irma downgraded soon after hitting Florida. It was a Cat 1 by 2 a.m. Monday north of Tampa; arrived in Georgia as a tropical storm Monday afternoon, and finished up in Mississippi as a tropical depression Tuesday, Sept. 12. It’s estimated that:

Like everyone else, we were stressed out for five days, wondering where Irma would hit and how hard. As its course shifted, we considered and discarded one option after another: drive to Atlanta, where our son lives. Have our daughter drive over here from her home in Kissimmee. Wait. Irma is now moving west? OK, we’ll head east toward her place.

With so many unknowns, and as we eyed the hoards of evacuees on the roads, we decided to stay put, trusting our impact resistant windows and ample distance from surge zones. We put up our shutters for the first time on Friday, Sept. 8. If necessary, we 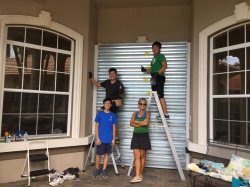 figured we’ll go across the road to the shelter at Germain Arena. (On Saturday, we learned lines were two miles long before its 10 a.m. opening; almost 5,000 people and many pets filled its capacity that night.)

By Saturday, Irma was barreling toward Fort Myers and Tampa as a category 4 with winds of 150 mph.

Around the same time, Hurricane Jose was almost at Category 5 strength, with winds of 155 mph. And in the Gulf of Mexico, Hurricane Katia made landfall in Mexico as a Category 1, less than a day after an 8.1 earthquake hit. Both storms dissipated quickly.

Take a look at our Irma photo gallery.

At 9:10 a.m. Cat 4 Irma slams into Cudjoe Key, 20 miles north of Key West, with sustained winds of 130 mph. Irma had downgraded to Category 3 but regained strength as it crossed the warm waters between Cuba and the Keys.

It was the first major hurricane to hit Florida since Wilma in 2005, and the first time two consecutive Category 4 hurricanes have hit the United States after Hurricane Harvey in Texas in August.

Moving at 8 mph, Irma would take six hours to get to its next landfall, weakening to a Cat 3 by 2 p.m.

At 3:35 p.m., Irma strikes Marco Island as a Cat 3 with 115 mph winds and 3-4 feet storm surges, far less than anticipated. It wrecks Everglades City, sends strong winds and rain to the Miami area, and dries up Tampa Bay with its counterclockwise rotation.

4:03 p.m. update from the National Weather Service: EXTREME WINDS, ASSOCIATED WITH THE EYEWALL OF HURRICANE IRMA, WERE MOVING ONSHORE OVER VINEYARDS, OR 5 MILES NORTHEAST OF NAPLES, MOVING NORTH AT 10 MPH. THIS IS AN EXTREMELY DANGEROUS AND LIFE-THREATENING SITUATION! * EXTREME WINDS WILL BE NEAR… BONITA SPRINGS AROUND 430 PM EDT. LOVERS KEY STATE PARK AROUND 500 PM EDT. THREE OAKS AND SAN CARLOS PARK AROUND 530 PM EDT. SOUTHWEST FLORIDA AIRPORT AROUND 540 PM EDT.

The strongest impact seem to be around 5:20 to 6 p.m. as the eyewall passes over Grandezza with torrential rainfall and northerly winds. 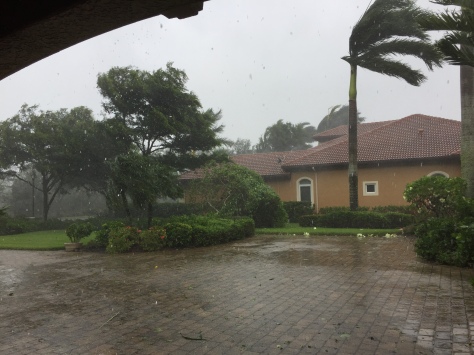 Between 5 and 6 p.m., a wind gust of 142 mph is reported at Naples Municipal Airport. But Irma was weakening.

Between 6 and 7 p.m., the Southwest Florida International Airport (just eight miles up the road from us) reports its highest wind gust at 88 mph.

During a lull in the storm, we circle the house to see three downed trees, numerous broken branches, fallen fronds and flooding throughout.

7:20 p.m.: Our power is restored. Others in Grandezza would be out for three days; nearby communities lost power for five days or more.

Georgia declares a state of emergency for all 159 counties.

Irma hits Lehigh Acres and Gateway hardest, with 11.5 inches of rain in Buckingham.

7:30 p.m.: Water leaks through the roof at Germain Arena

8 p.m. update from the National Weather Service: Maximum sustained winds have decreased to near 105 mph…Hurricane-force winds extend outward up to 80 miles (130 km) from the center.

9 p.m.: More than 3.3 million Floridians are without power.

10:25 p.m.: A third construction crane falls to Irma’s winds, in Fort Lauderdale Beach, adding to two others in Miami.

Take a look at our Irma photo gallery.