Our first visit to this vast country exceeded our expectations in every way: The beauty and variety of the gorgeous coast and the mountainous interior; the sophisticated and inexpensive food; and the marvelous creatures, especially on our Timbavati safari. But we were also taken aback by the shantytowns, barbed wire and the division of black and white.

Here are highlights and tips from our trip from Feb. 24-March 15, 2019, with our friends Mary and George. We agreed this was a perfect itinerary, including nearly all our lodgings.

Table Mountain: We had purchased cable car tickets online long ago as they are good for 7 days. Based on the weather forecast, we went on a beautiful Monday, arriving at 8:20 a.m. to beat the tour buses. We got onto the second cable car (there are two that alternate, holding 65 each) for the fast ride up. The cable car rotates, and has opened and closed windows that everyone crowds against for pictures.

On top: What a tremendous plateau! The walking paths are pretty flat and easy; the more adventurous can scamper onto the many cliff rocks. We spent about 2 1/2 hours soaking it in, including the cute dassies (rock hyraxes). When we got back down, the lines were horrendous.

Camps Bay: We had dinner in this area twice with a sparkling sunset one night. It’s a beautiful, vibrant beach set against Lion’s Head and the 12 Apostles (back side) of Table Mountain.

Robben Island: We booked the 9 a.m. tour two days in advance and sauntered to the waterfront from our hotel. (Beware your GPS directions: you want the museum, not the “embarkation building”!) Imagine our dismay when we got to the short bridge connecting the waterfront to the museum and were told it out for maintenance! We had to hoof 1.3 miles around another bridge, arriving at 9:06. They held the ferry till 9:15.

Watch for great views of Cape Town and Table Mountain from the back of the ferry–they’ll let you hover in the doorway after departure. Once on the island, you’re loaded onto buses to stagger tours of key sites (such as the limestone quarry where Mandela and others toiled) before ending at the prison cell where Mandela was imprisoned for 17 of his 28 years of captivity. Sobering and powerful reminder of a painful era.

Downtown Cape Town: We didn’t see many other tourists while strolling through the key sites such as the Bo Kaap Muslim quarter, City Hall where Mandela spoke after his 1990 release and when he became president four years later, Rev. Tutu’s church, the Castle of Good Hope (oldest building in town) and the Company’s Gardens. 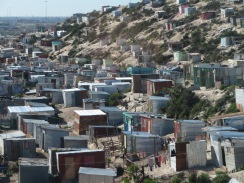 Shantytown or township outside Cape Town

Apartheid is over, but the problems persist. On our travels, it was easy to see that the vast amount of wealth is still controlled by whites, despite the decline in population. We learned about the alarming emigration of whites and influx of migrants from troubled African countries, and heard voices of anger, bitterness and fear. Everywhere with middle class affluence was protected by barbed wire walls and “armed response” signs.

I hesitate to mention this but my husband Randy was targeted twice in one day in broad daylight in Cape Town. Once someone tried to unzip his backpack (as I walked beside him!) but another local yelled at him and the would-be thief ran off. A few hours later, someone tried to grab his cellphone out of his left hand (he was using it for directions). Randy instinctively hung on and swung at the assailant with his right hand while watching out for his companion. This was on a busy road so after a brief standoff and as cars started responding, the two men left. Randy was unhurt.

These incidents should not put you off but should caution you to be wary and smart. We did not carry cellphones openly after this, and put valuables far deeper into the backpack.

Boulders Beach African Penguins: These were so cute! There are some 2,000 breeding pairs clustered near the end of the walkway, on the sand and on the beach. It was nesting season and we loved watching the infants and siblings frolic. 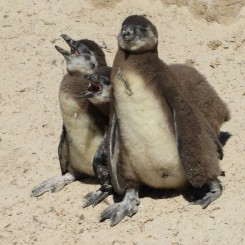 Cape of Good Hope: Wonderful views and hike between the cape and Cape Point, which is where the lighthouses are. If you don’t hike, you just drive to both sites. 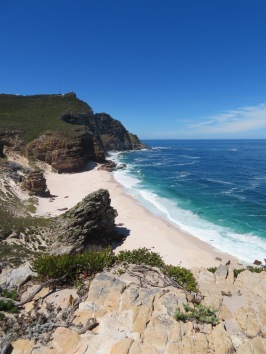 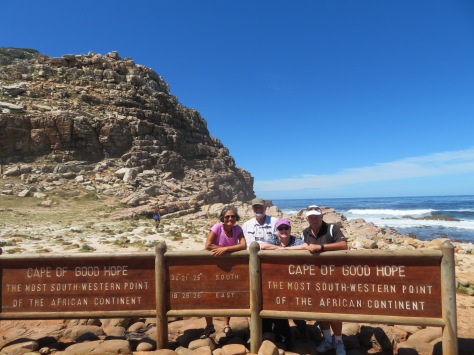 We chose to pay for a driver so we could all enjoy the journey and felt it was well worthwhile, especially on some of the trickier roads. Kabura did a fine job for us with a day trip from Cape Town, then nine days along the wine and garden routes.

Gansbaai Dyer Island cruise: Known as the great white shark capital (in season), Gansbaai is home to a huge colony of cape fur seals and a smaller colony of penguins. The cruise was delightful even though it wasn’t shark or whale season and we saw all of the “Big 5” marine creatures: dolphins, sharks, whales, penguins and fantastically active seals. The weather was gorgeous with only a few swells.

By the way: shark divers looked a little silly to us: they’re in wet suits dunked in a small cage attached to the boat. The crew would toss out fish/chum to entice sharks (copper ones while we were there) to swim right up to the cage, over and over again. 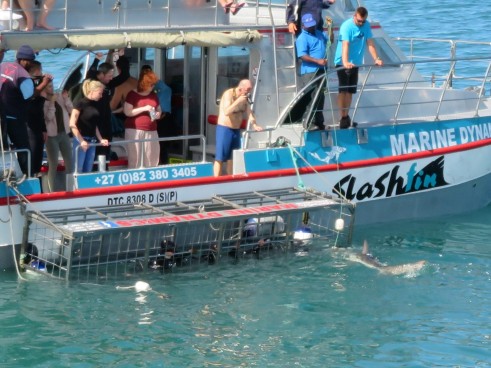 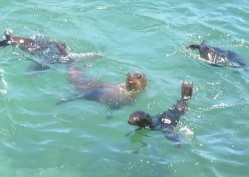 Oudtshoorn: I had debated whether to stop here. But surely one must check out the ostrich capital of the world (80% are in this region)! We had an educational and fun tour at Highgate, holding 5-day old chicks and getting ostrich “massages.” I also did the adventure tour at Cango Caves, where you actually crawl through tight spaces for the fun of it; quite an adrenalin rush. And we drove the impressive all-gravel Swartberg Pass for sweeping mountain views. 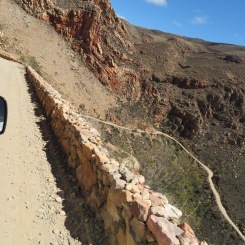 My caboose going through Cango Caves

Tsitsikamma National Park: Beautiful rocky shore with the crashing Indian ocean, and a lovely visual feast at the Storms River Mouth with its three suspension bridges. It’s a bit of a walk with many steps to get there but doable for most. We never saw the boat options that were supposed to be at the bridge though there were kayakers. I took the steep hike to the top overlook above the mouth in about 30 minutes. (BTW: the entry fee is much cheaper when you tell them you’ll just be a few hours.)

We lucked out with a luxurious Plettenberg base through airbnb that was enormous and reasonable with fabulous views.

Robberg Reserve:  This compact peninsula at Plettenberg has very cool sand dunes and huge waves on one side. It would not be worthwhile unless you went at least to the middle (note the small seal colony below), across the Witsand sand dune and down along the sand and rocks (RT 2.6 miles) with the roaring Indian Ocean all about.

We flew from Port Elizabeth to Hoedspruit with a change at J-Burg, arriving at Makanyi around 3 p.m.  Makanyi is part of the greater Kruger national park; there is no fencing but we aren’t allowed into Kruger itself. I had chosen Timbavati for our Kruger experience because it is less crowded/popular and has off-road and evening drives. Makanyi had glowing Tripadvisor reviews and a stay four nights, pay for three deal!

Great decision! We were captivated by the stylish setting, thoughtful touches and amazing animal encounters.

Each morning, our guide Sean would call at 5:30; we’d go to the lodge for coffee and muffins then depart at 6 for our first game drive, stopping midway for coffee (with perhaps a splash of Amarula). Back around 9 for a robust breakfast at 10, followed by a light lunch from 1-2:30 and tea at 4. Out again from 4:30 till 7:30ish, with a sundowner drink around sunset at 6:20. Drinks (included) around 7:45 with dinner at 8.

On our first drive, we caught sight of a rare pack of endangered wild dogs, and a stunning battle for an impala carcass by two leopards and a hyena, which ended up with the prize! Another day, our tracker, Luckson, caught a faint lion sneeze, which led to a spectacular viewing of a pride at the watering hole. And, to my surprise, we saw seven rhinos in two days.

Down time was spent on naps, a little exercise in the gym, and soaking in the tranquil setting, interrupted only by hippo snorts. This was our third trip to Africa (the first two were to Tanzania) and Makanyi really spoiled us.

We drove ourselves from Hoedspruit (Avis rental) along the beautiful Blyde River Canyon to Nelspruit and J-Burg. The roads were easy but traffic was tricky. I stayed within speed limits while my friends helpfully shouted out STAY LEFT; there were no signs of dubious police as feared.

Blyde River Canyon is not very well marketed by South Africa but definitely worth the effort! At 16 miles long, it’s one of the largest in the world, and perhaps the greenest, with a variety of pull-off overlooks (each with a fee). It was a great wrap-up to our trip.

Share if you liked this! Click here for our top photos if you need any more enticement!